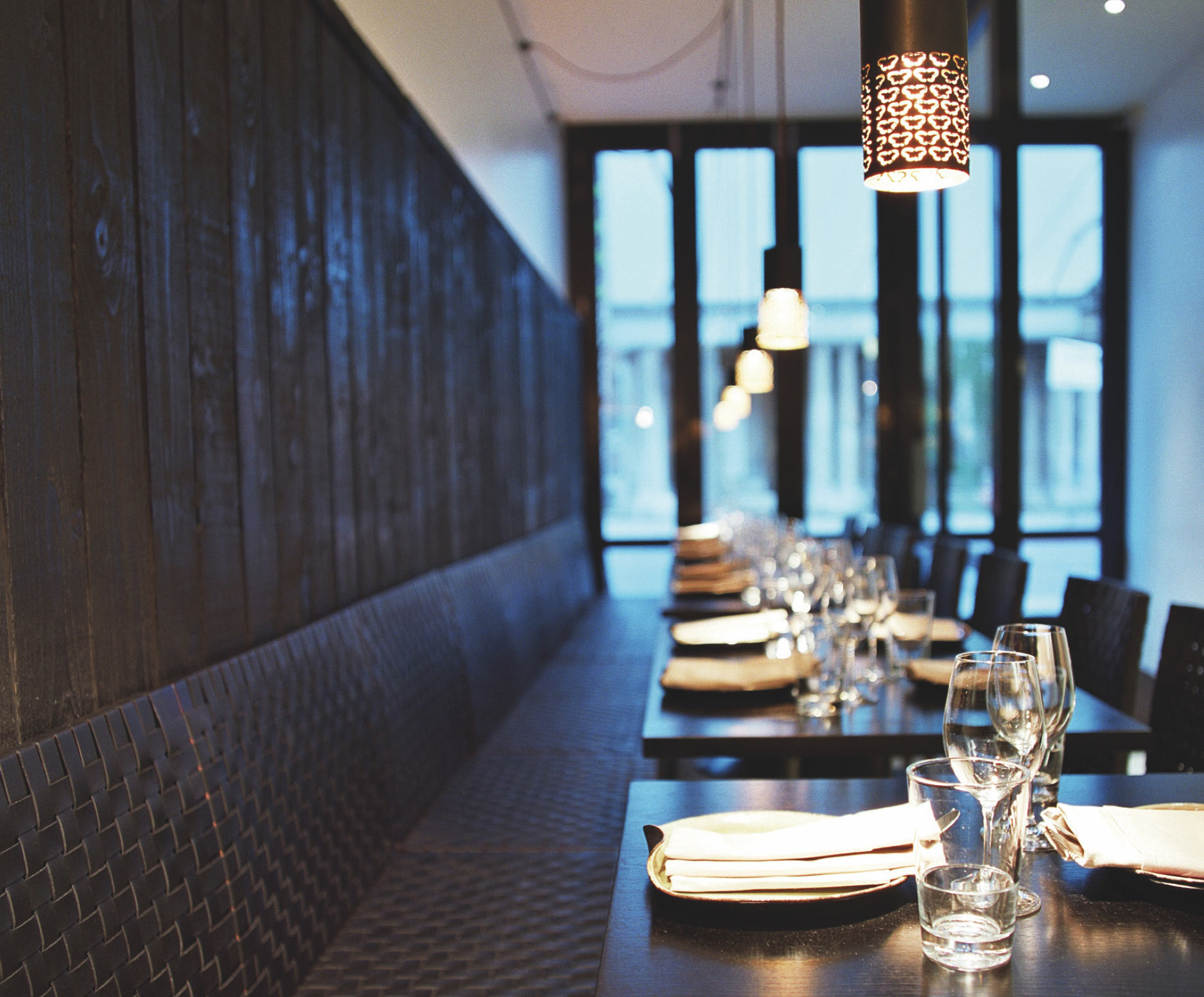 The name “Isarn” was derived from Isana, a Shiva deity. She has “invisible power that governs the universe” with north and east representing water and air, respectively. The menu of the restaurant reflects this with offerings such as coconut sticky rice, green papaya salad and sumptuous desserts from the region. Such attention to detail in the food is to be expected; co-owner Tina Juengsoongneun is Alan Yau’s sister.

Beginning as neighbourhood eatery, a welcome antidote to the exploding market of chain restaurants on Islington’s popular Upper Street. The restaurant occupies a restricted linear site, which required ingenuity on the part of the architects to achieve a functional and inviting dining interior. Described by Time Out as possessing a “slinky, contemporary decor, with dark wood and oversized lampshades, [which] gives Isarn a polished, expensive image.” By controlling the perspective, the architects made a virtue of the long narrow site (four metres wide by 23 metres long). Linking four areas—the street elevation, the bar, the conservatory and the courtyard—a simple solution that provides an atmospheric and vivacious space, with a canopied roof giving a sense of heightened volume, despite its diminutive actual size.

Natural sailcloth for the canopy stretches overhead suspended in the ‘air’, imitating the traditional rafts with their makeshift masts crossing the Mekong through the depth of the restaurant. The inspiration for the lighting design was the Candle Festival, which marks the start of Vassa in July in Ubon. Lighting designer Jonathan Cole made the pendant pieces for the architects. Having shared studio space with Archer Humphryes in the past, he was able to execute the designs in tandem with the evolution of the overall concept, which added dynamism to the lights—a prominent part of the scheme. Two pendant designs are predominant: one is small and focused in scale with patterns carefully cut into delicate folded black metal; the other is a frangible translucent parchment paper—a bright white Thai lantern. Both are adorned with a butterfly design that, within the metal pendant, creates a silhouette with beams of refracted light, spinning against the background walls. In contrast, the paper lanterns create an ambient stream of light, softly radiating. Butterflies often represent rebirth in artistic symbolism; the butterfly was the only ornamentation that Archer Humphryes introduced within the otherwise modern interior. 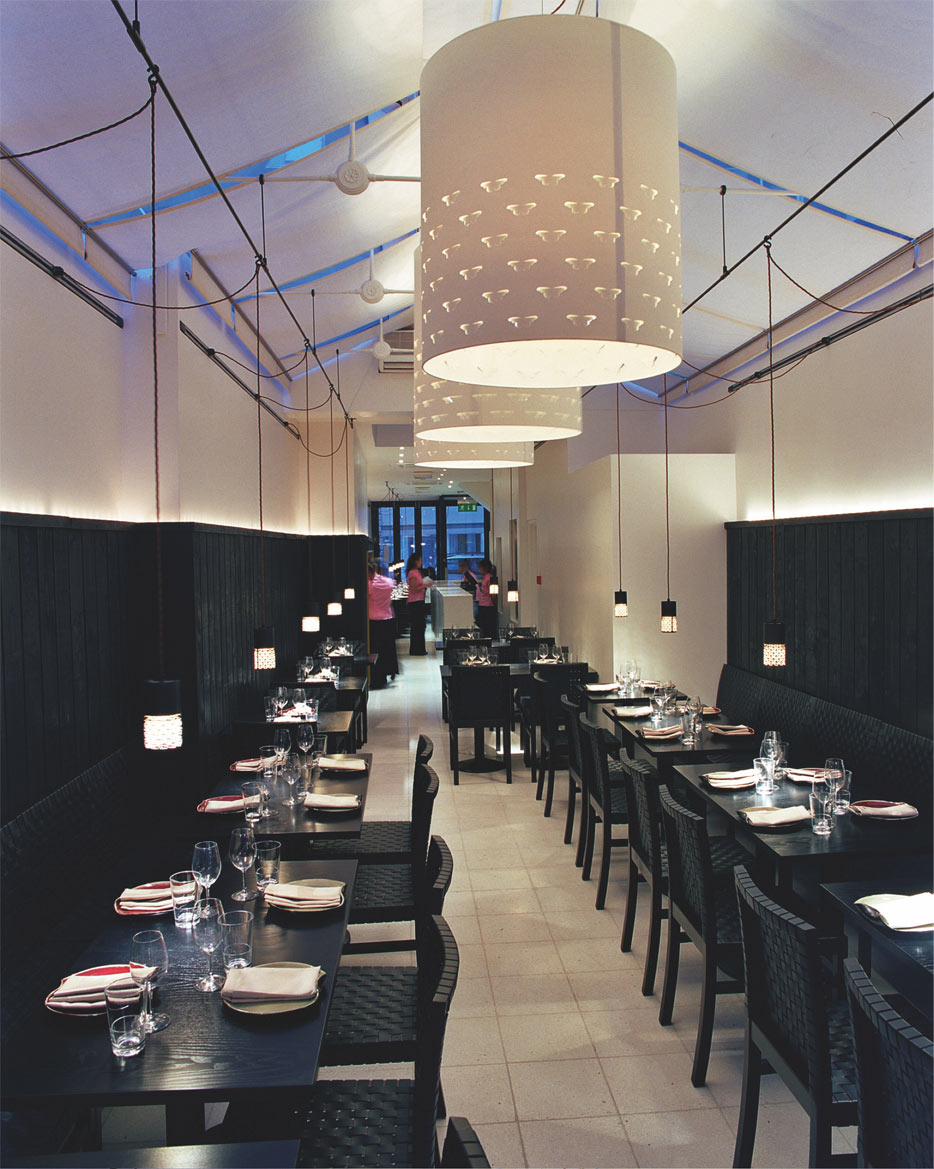 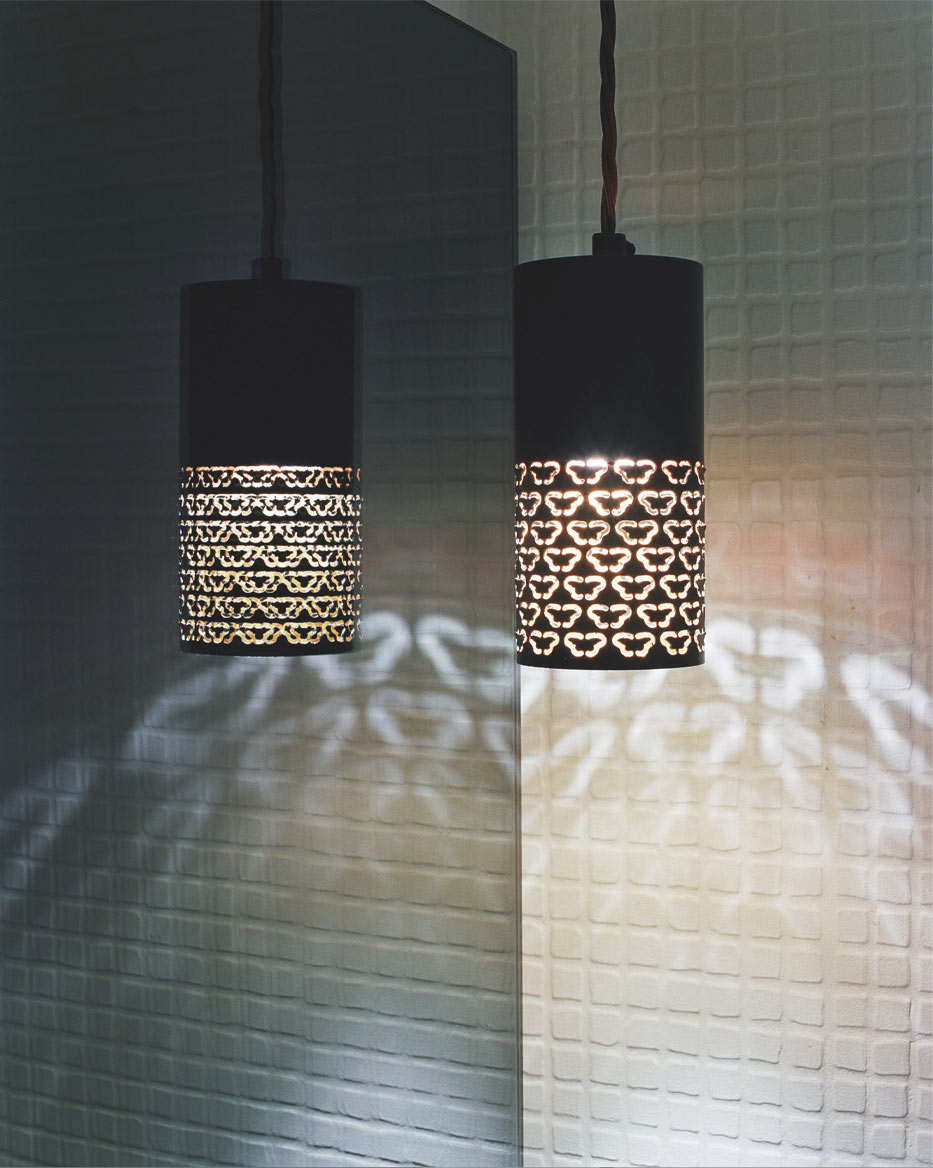